A New ‘Martyr’ Who Died in a Car Accident

Marian T. Horvat, Ph.D.
My friend Jan has often questioned me about the many disputable beatifications and canonizations being made by the post-Conciliar Popes. After the 1983 Code of Canon Law threw out 141 essential canons regulating the processes and post-Conciliar Popes arbitrarily set aside the requirement of miracles, the faithful no longer have the guarantee of infallibility that Catholics had relied on since the Council of Trent.

Now, we have a proposed beatification that "takes the cake," as Jan noted, using the term in the sense of being the worst in a series of negative actions.

The latest travesty to come from the Vatican is Francis' "clearing the way" for the beatification of Argentinean Bishop Enrique Angelelli as a "martyr of the Faith." By the way, this attribution of martyrdom to the leftist Bishop conveniently does away with the need for a miracle attributed to his intercession. 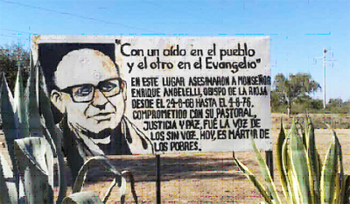 In the picture at left, we can read how the local Liberation Theology cells have been describing the Prelate. The billboard reads: "With one ear in the village and the other in the Gospel" - In this place they assassinated Msgr. Enrique Angelelli, the bishop of Rioja from August 24, 1968 to August 4, 1976. Committed to his pastoral of justice and peace, he was the voice of the voiceless. Today, he is the martyr of the poor.

It sounds very beautiful, a bishop martyred on that site because he was the champion of oppressed little people. In fact, this is a fairy tale of the revolutionary leftist movements and socialist Catholics promoting Liberation Theology in Argentina.

In fact, on this site Bishop Angelelli lost his life in a simple car accident. He did not spill his blood for Christ and the Catholic Faith, which always used to define the heroic title of martyr.

The Bishop's chauffeur had been warned by the town mechanic not to drive the small truck he was on the day he died because it was not safe. He disregarded that good advice, the car malfunctioned and overturned, the Bishop died as result of the injuries he suffered. This is the story that was confirmed by eye-witnesses: a maintenance man working on an electrical pole near the site, two other workers and a driver who was the first to arrive at the scene of the accident. 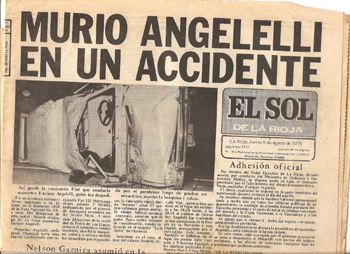 The Liberation Theology cells whose ideals Msgr. Angelelli championed were quick to change the facts and post a different story: that the car was pushed off the road by government agents of the military dictatorship. Then, these ruffians beat the Bishop who was openly challenging the military dictatorship and left him dead. This was, however, a scenario the eye-witnesses did not validate. But it certainly made a much better story for communist propaganda purposes.

In fact, after much wrangling over the different stories, on April 20, 1990 the Appellate Court of the State of Cordoba declared it impossible to prove that the cause of the accident was anything other than the mechanical malfunctioning of the car.

Notwithstanding this official declaration, the leftist propaganda has relentlessly broadcast the story of the assassination of a people's Bishop – the Argentina's version of Oscar Romero – who was allegedly assassinated by the right-wing dictatorship.

A model for the future Pope Francis

It is not surprising to find Francis championing one of the trailblazers in the Marxist worker-priests movement in Argentina. In the ‘50s Fr. Angelelli was already caught up in socialist movements and founded the Young Christian Workers in Córdoba, working in the slums, promoting worker rights and organizing labor union manifestations. That caught the attention of John XXIII, who appointed him auxiliary Bishop of the Archdiocese of Cordoba in 1960. 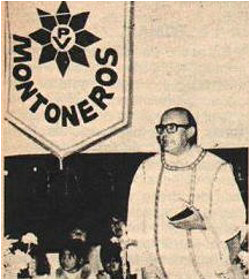 Angellini preaching under the Montoneros banner

Under the pretense of working to improve conditions of the poor, he promoted Communism so radically that he was removed from his post in 1964.

His position was vindicated by the post-conciliar Progressivism that swept over Latin America in the form of an insurgent militancy that favored Marxist initiatives and communist revolutionary movements. This action moved forward under the pretext of "opening up to the modern world."

In 1968, Paul VI appointed Angelelli Bishop of the Diocese of La Rioja. There, among conservative Catholics he became known as “Bishop Satan-elli” (as opposed to “Angel”-elli) because of his strident support for the terrorist organization called the "Monteneros," the most extremist communist “Christian” army in Argentina's history. 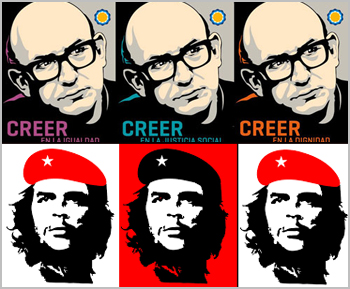 Angelelli's work, condemned by the conservatives in the Church and government, was defended by Superior General of the Jesuits Pedro Arrupe and Vatican overseer Archbishop Zazpe, who gave full support to his "pastoral work."

Is it any wonder that Francis, champion himself of the "poor and marginalized," who takes every opportunity to promote the Liberation Theology agenda in both Church and State, would present Angelelli as a model for Catholics? A martyr of the faith, he certainly was not. A model ideal for Pope Bergoglio, he certainly was.

Jan and I ended our conversation in full agreement: These are confusing times for Catholics. As one blogger recently noted, every day it seems we have a new contradiction being spooned out to Catholics from the Vatican: Communion for those who are not in communion with the Church, consecrated virgins who do not need to be virgins, the death penalty declared "inadmissible," a cured back pain declared a miracle, and now, a communist “martyr” who dies in a car accident...