The Truth Behind the Conciliar Crisis 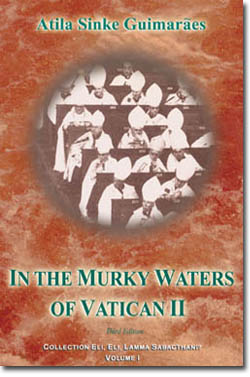 What is the great dilemma at the center of the modern world? According to eminent Catholic layman Prof. Plinio Corrêa de Oliveira, it is Vatican Council II. (1) Every aspect of the crisis in the Church – the Novus Ordo Mass, the emptying of churches, the loss of vocations, the non-stop ecumenism with false religions, the promotion of immorality, the homosexuality and pedophilia in the clergy, the worldwide installation of Communism, and even the Tribalism we have seen at the Amazon Synod – has its roots in the documents of Vatican Council II.

Mr. Atila Guimarães wrote his 11-volume Collection on Vatican Council II following the recommendation of his mentor, Prof. Plinio. (2) Volume 1 – In the Murky Waters of Vatican II – serves as a summary and primer for the Collection. In this volume that the reader will learn how Progressivism officially installed itself in the Church through the documents of the Council by planting an intentional ambiguity, which favored all sorts of errors and abuses. The reader will also learn why it is our duty as Catholics to resist bad Popes and to fight Progressivism.

When the first edition came out in 1997, there were few who dared to criticize the Council outright, even fewer who would be bold to suggest the Council should be declared null and void (in the Conclusion of this book). I truly believe it is thanks to this book that people feel freer to criticize Vatican II today.

Nowadays, it seems everyone has a go at the Council. But there are very few who are courageous enough to describe the spirit and intent to destroy behind the documents, and Guimarães is one of those few who did exactly that.

The Collection is an unpretentious, objective and thorough analysis of the Council.

Its author is a layman who dedicated his life to study and to fight the Revolution in the Church and society. He adopted an inductive method, taking many quotes from the documents and the progressivist authors who collaborated in writing those documents. He laid them out clearly so that the quotes speak for themselves.

Questions that this book answers

In this book, the reader will find answers to questions such as these:

Modernism passed the torch to Progressivism

Card. Suenens: ‘Vatican II was nothing but a prologue to a Vatican III or a Jerusalem II’ (p. 118)

I have heard some people attack this book, saying that it is too difficult to read and that there are too many footnotes.

‘It is difficult to read’

This book is not meant to be a novel with funny jokes that you can read in an afternoon. It is a serious book that deals with the most important topic of our time. It is an x-ray of the Council that reveals how the Church is infiltrated. Consequently, this is not a work to entertain. It is an analysis to allow an efficient resistance against Progressivism.

Even so, I did not find the book difficult or tiresome to read. Since I am not an expert in the subject, I found that there were certain terms that I had to look up in a dictionary. I was actually happy to learn these new terms. Besides this, the ideas are as clearly explained as they can be. The final picture that I got was not a pleasant one, because it shows indisputably that the enemy took over the Catholic Church.

No, it is not a difficult reading.

I believe that there was not even one footnote that is unnecessary. The footnotes contained important explanations for ideas or terms that might be confusing or unfamiliar.

After 50 years of destruction in the Church, how could Catholics keep their sensus fidelium intact?

For instance, the first footnote in the book explains the Latin term sensus fidelium, meaning common sense in the matter of Faith or Morals (p. 29). In a time where Progressivism has worked to destroy the Faith in souls for over 50 years, who would argue that Catholics have maintained their Catholic sense completely intact and unharmed? Such an explanation for this term is necessary, since progressivists have tried to numb our sensus fidelium or deter its use to install democracy in the Church.

The footnotes provide essential evidence that reveals the insidious progressivist plan behind Vatican II. Its material gives the reader elements to judge for himself the value of the quoted texts and to have at hand the means to refute them.

Without the footnotes, perhaps these same people who criticize the book for having too many would say that it lacks sufficient backing for its affirmations. This kind of complaint seems to reveal pettiness, envy or bad faith.

A book that every able Catholic should read

In the future, people will look back on our time and see how Vatican II was the defining point in the crisis in the Church. They will see how many Catholics complacently went along with its innovations and thus helped the progressivists continue to flagellate the Mystical Body of Our Lord. They will also see how others resisted, fighting against the Revolution in the Church.

It is a powerful instrument to define Catholics at the present, and will be a landmark for the future to understand our time.

The first step to resolve any problem is to understand and acknowledge it, and this book helps the average Catholic do just that. After understanding, he must decide what to do: Go along with the destruction of the Church or resist the infiltrated enemies?

Which camp will the reader decide to be in? It is the answer that each one has to answer for himself now, and before God when he dies. I hope he will join Guimarães in the glorious fight to defend the Church against Progressivism.