Yes, please
No, thanks
Saints of the Day

Gaspar de Bono was born in Valencia on January 5, 1530. His father was a linen weaver by trade and later a knife-grinder, poor but a man with a profound religious life. His mother, who was blinded at age 40, three years after Gaspar's birth, was a person of a great patience and resignation. 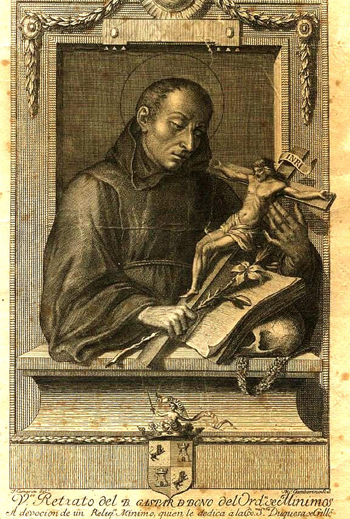 The warrior who became a Friar

Every morning the couple attended Mass and offered their day to God. While the husband worked, the wife meditated or weaved. From this couple four sons were born and the parents resolved to give a better educational formation to one of them, Gaspar, for they noted the exceptional gifts in the child.

Indeed, the youth was gifted with a great intelligence and personal charm. Following the examples of his parents, he was pious and at a young age he was received as Third Order Dominican. In his teens Gaspar was employed by a silk merchant who sponsored his studies.

However, Divine Providence led Gaspar to serve as a soldier in the army of the Emperor Charles V. This youth became an extraordinary example of piety, courage, and Christian perfection and performed valorous deeds of war.

As a military man he never swore or took the name of God in vain, something quite common at the time among his fellow soldiers. He was extremely vigilant even when he received visits from the most honorable of ladies. He avoided undignified companions. After the fulfillment of his duties, he would go to churches, hospitals and other places of devotion.

A strong devoté of the Most Holy Virgin, he prayed her Litany and the Rosary every day. He had also special devotion to St. Anne, St. Joseph, St. Vincent Ferrer and the Souls of Purgatory.

But no one should imagine that his nature was backward or shy. He was one of the most handsome and gentle soldiers in the army and one of the best in arms, courageous and brave with his sword, which he took up only for the glory of God and his Emperor. 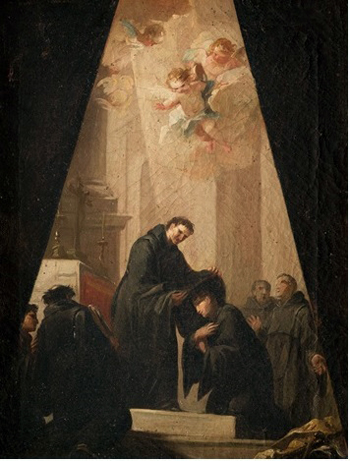 Once he was with a small company fighting in Lombardy and was attacked by the main body of the enemy's cavalry. Realizing he could not face the large group alone, he slowly retreated, all the while trying to kill some of the adversaries to do what he could to weaken the opposition. He did not notice a deep moat and fell into it, with his horse atop him. Already wounded by the fall, he received three blows of a halberd by an enemy soldier.

Left for dead, he turned to the Holy Virgin, promising to enter the Order of the Minim Friars founded by St. Francis of Paula if he were saved. And he survived miraculously. He returned to Valencia and was received shortly into that religious family at age 30 in the year 1560 and was ordained a priest in 1562.

In this new path he excelled as an example of virtue and strict compliance with the Rule for the other priests. Eventually he became Vicar Provincial for the Catalan Province, and later the regional Superior of Valencia. Very virtuous, he was notable for the practice of humility and mortification. He died in 1604 at age 74 while praying a Hail Mary. He was beatified by Pius VI in 1786.

A contemporary biographer describes him as follows:

When he was young, he was extraordinarily handsome, of a medium height with a well-proportionate body. When he became old, he was a little bent-over, which gave him a graver appearance. His physiognomy was open, pleasant and very joyful, even when he reached an advanced age. His forehead was high; his blue eyes neither large nor small, but joyful, alive, calm and straightforward. His eyebrows curved; his nose was well-proportioned and somewhat aquiline; the mouth was medium sized with very visible lips; the beard very dense, all white; his walk slow and solemn. He stuttered a little; his complexion was sanguineous and choleric. He was one of the most venerable old men of the time.

Above, a picture of Gaspar closer to reality; below, a sentimental ‘white heresy’ deturpation of him 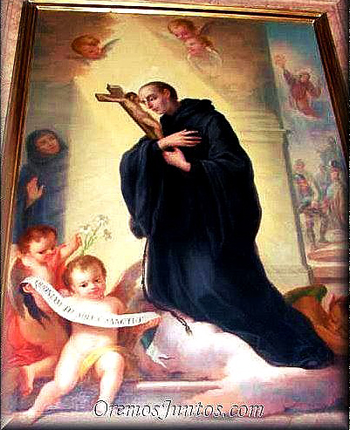 On the other hand, the selection also addresses Bl. Gaspar's life in a quite complete way, relating his life as a warrior. It does not omit that he was an efficient warrior. Normally, the sentimental hagiography mentions that a saint was a warrior only in passing, to give the idea that a saint never uses the sword; violence is intrinsically bad and a Catholic should never use force at the service of his ideas. This is an effeminate and sentimental idea of what a Catholic should be.

So this selection cannot be qualified as completely sentimental. However, when it describes the Saint it spends a lot of time giving details of his piety and his religious life, but speaks very little about his deeds of arms. In fact, it mentions them but not describe any of his deeds except for one where the Saint is defeated and is the cause for him to leave that state of life, where he bore arms.

Now, we would like to have a selection that would have also reported how the valiant deeds of the Saint, the enemies that he attacked and killed, how he advanced fearlessly in dangerous situations, risking his life. It would be good to hear how, when he was alone in the middle of enemies, he prayed to Our Lady and she sent an Archangel to help him defeat the adversaries. Thus is how we would like to see military combativeness praised as an integral part of the virtue of a Saint. This is how Scriptures, inspired by the Holy Spirit, describes the figure of Judas Maccabeus.

The military glory of Bl. Gaspar de Bono, which must have existed, was amputated from this selection. We miss it; we would like to contemplate it.

If a side altar were built in honor of Bl. Gaspar in a church of the Order of St. Vincent of Paul it should show, besides aspects of his goodness, other aspects honoring his courage. Why? So that we might go to the foot of that altar and ask the Saint for the virtue of fortitude. A Catholic warrior cannot be surpassed by the courage of a son of darkness, a communist, for example. The most audacious revolutionary has to be timid in comparison to the courage of a true Catholic.

But the figure of a Saint in the act of destroying an adversary would send a sentimental shiver down the spines of some ladies and young women.

This combative aspect of Saints was left out of hagiographies even in the seminaries of the '30s and '40s, where it was in some way implied that for an individual to be a priest he could not be entirely virile. 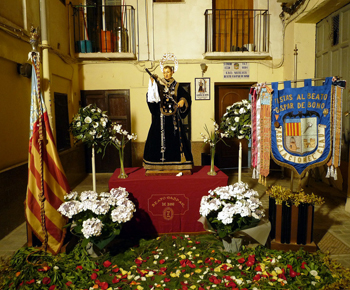 So, we see that even in an objective selection, well-done in some aspects with edifying data for our spiritual lives, the irradiation of this state of spirit entered. It was this same mindset that dominated Catholic piety for a long time – at least in South America.

The result is that when the influence of the Church and the clergy were exercized in a correct way – a way that could have brought triumph to the Church if the combative spirit were present – the ferment of this soft and sweetened mindset made that powerful influence incapable of achieving the victory that was in its reach.

Afterwards this mentality changed into a blatantly bad one. To the degree that this change occurred, this sentimentalism became aggressive and combative in the service of evil. The theology of violence started to appear, which is the extreme opposite of the pious sweetness. The thesis appeared that the priest and nun must be violent; the religious should become a terrorist in order to apply social justice. We see that one abyss attracted another. 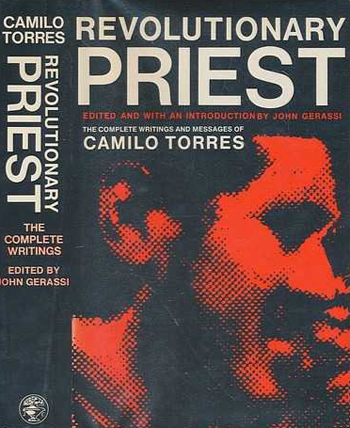 Camilo Torres, the guerilla communist priest, was the opposite extreme of the sentimental soft priest

Notwithstanding this current, the state of mind that every polemic, or every combat, was wrong continued. This spirit is responsible for one aspect of the dramatic crisis we are witnessing today. What was this aspect? It is that when Progressivism, this Neo-Modernism, started to sprout in the time of Benedict XV and Pius XI, it would have been very easy to smash it.

It was not smashed because a great number of those who held the power in the Church had this soft mentality. They reacted with the same softness that appears in this selection when it reveals a horror to present sanctity as exercized in the military sphere.

We see here the zigzagging effects of the Revolution has affected the life of piety and the spiritual life, exercising an influence in the sphere of the spiritual lives of an enormous number of Catholics.

Once again, it is a phenomenon of Revolution in the Tendencies. Here in the selection, a wrong or erroneous doctrine is not given. It is not said in a positive way that Catholics should not be courageous military men. The opposite is even said. But there are omissions that are present in a choir of middle-tones, suggestio falsi and half-truths that end by insinuating this position.

Before all else, there is here a defense of the life of Bl. Gaspar de Bono, which was presented in a mutilated way. Here also is our defense against so many lives of Saints that are similarly mutilated everywhere.

The Saint of the Day features highlights from the lives of saints based on comments made by the late Prof. Plinio Corrêa de Oliveira. Following the example of St. John Bosco who used to make similar talks for the boys of his College, each evening it was Prof. Plinio’s custom to make a short commentary on the lives of the next day’s saint in a meeting for youth in order to encourage them in the practice of virtue and love for the Catholic Church. TIA thought that its readers could profit from these valuable commentaries.

The texts of both the biographical data and the comments come from personal notes taken by Atila S. Guimarães from 1964 to 1995. Given the fact that the source is a personal notebook, it is possible that at times the biographic notes transcribed here will not rigorously follow the original text read by Prof. Plinio. The commentaries have also been adapted and translated for TIA’s site.